Touring as a music photographer is a great job, but honestly it is more of a vessel for me to learn, grow, and meet people through. I feel like I grew a tiny bit on this tour. I have some images I like below from the thirty days I spent with A Day To Remember all over the U S of A. If you I think I am conceited after reading this blog, just know I hate the other 15,970 images. Hahahah. But first, a few visuals to show you what my life was like on this tour.

Here is a video version of this blog – enjoy.

Critiquing Your Own Photos 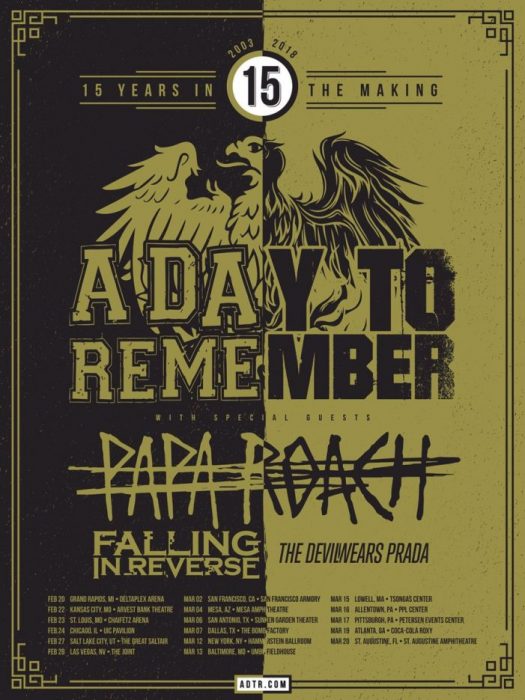 Alright now to the images. I usually break these down to a day by day and show some images from the trip. But, lately I have really been trying to work on just picking my favorites. Like really narrowing it down. I want to get better, so I am very hard on myself- in a constructive way. Anyway, if you ever want to critique my images, feel free to. I am going to write why I picked each image around it. Hopefully that is interesting. Sometimes I forget what is interesting to other people, cause what is interesting to me… isn’t always relatable.

I value peoples’ opinions, but at the same time I also take my own in to consideration. My work is very much a part of me, but at the same time – it’s separate. If someone says they do not like my work, that is ok! There is a big difference between someone saying that and someone saying they do not like you as a person. I read an article when I start photography that touched on the concept of separating yourself from you photography with the intention of being able to receive critiques and use them to improve – and I love it. 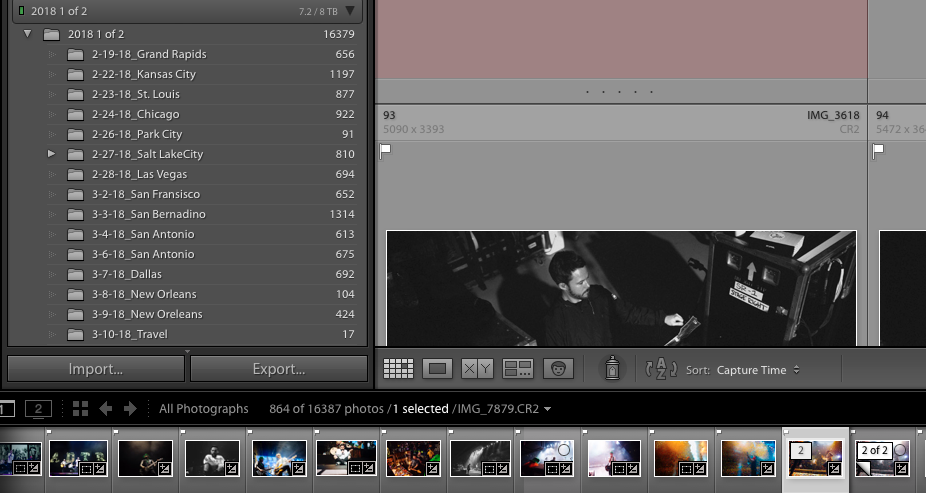 I like most of the images because of their simplicity. The Sigma DP2 Quattro has some amazing colors and gives you disgusting detail. It was hard to not just get really close to everyone and take photos of their eyes, cause that is what I would do if I didn’t have to take someone else’s schedule, time, and comfortability into consideration hahah.

I bounced between the portrait/ landscape on this image. Settled on portrait but landscape is nice cause you can see the details a bit better. I just love the soft empty space so muhc.

I like how the smoke frames him. Well, the CO2 frames him. Its hard to get an image like this with so few distractions. I still do have trouble on the crop/ angle for this one.

The goal of this image was to show the mosh pit. It’s always a health pit at an ADTR show, as long as the floor space permits. I look forward to the standing shows, and not so much to the seated shows. It is such a natural atmosphere for their show and it’s a shame that some go without it.

The horizon on this image will be the death of me, I just can’t seem to get it right. Anyway I like how the crowd is dark and helps you focus on Kevin laying on the confetti. You can tell the show is over because the lights are almost all off, and the confetti has been shot.

This is just a classic rock guitar shot. Sometimes I feel that images just work to represent the most basic of concert happenings.

I guess I am just obsessed with empty space. I like the way this image works wit your eye. Shooting these is fun because it is done during soundcheck, and I can move around my subject 360° and control the image a bit more than usual.

I enjoy the depth of this image, and am very happy I can put it in color. I edit edit the left to be a tad more warm and the right, a bit more cold. This is Johnny, A Day To Remember’s stage left guitar tech. He does a lot of work.

This is a photograph of the band’s managers during their practice/ rehearsal day. I just love that you can tell they are conversing even though you can only see their outline. I stood up, sat down, laid on the ground, and raised my camera above my head playing with the spacing of the background relative to the subject for this image.

This is the only image I got stuck on, and these are actually two different images, but I just could not decide between color and black and white. I like that it says ADTR and the colors are all nice in the first one, but the second one changes all together for me. I really don’t know, I’ll decide late, or rather… eventually.

I went to the YMCA with Neil a few times as he trained for his triathlon. This was at the end of his 45 minute swim. I think the image shows his exhaustion and I like the framing of it a lot as well.

They are a bunch of weird dudes. The personalities are all here, just very subtle. I am sure I see this image differently than you, but I hope you can see each one of their personalities creeping through.

I have shot Jeremy in the crowd 100’s of times. Usually people try to get the over the shoulder image. I noticed after awhile that I was trying to shoot the same image over and over from the same angle, night after night. That is how I perfect my images! But I thought about it for awhile and I feel like at some point I have to say *okay, you got a prettttttyyy good shot from this angle, lets try another* – so this is my other angle.

Every night they have people crowd surf, on top of other crowd surfers. I usually shoot it with a telephoto from stage. I take a lot of images, but only a few look nice.

I enjoy panoramas, but there are very few light settings during a live show that allow for it. The acoustic part of the set is one of them. You need the lights to stay the same, or very similar, for at least a few seconds.

Same shot as above (a few shots ago) , different angle. I love those spot lights, they give such beautiful light. Even better when all the other lights are out!

Drummer shots are known for being difficult. Well, because the drummer is all the way in back. However they do get easier once you have stage access. I like this cause of all the colors. I think they are beautiful, and of course the subject of the photograph is a kind human named Alex.

I went out that one night in New Orleans with the band/ crew. It was amazing. I love hanging with them, they make me happy. 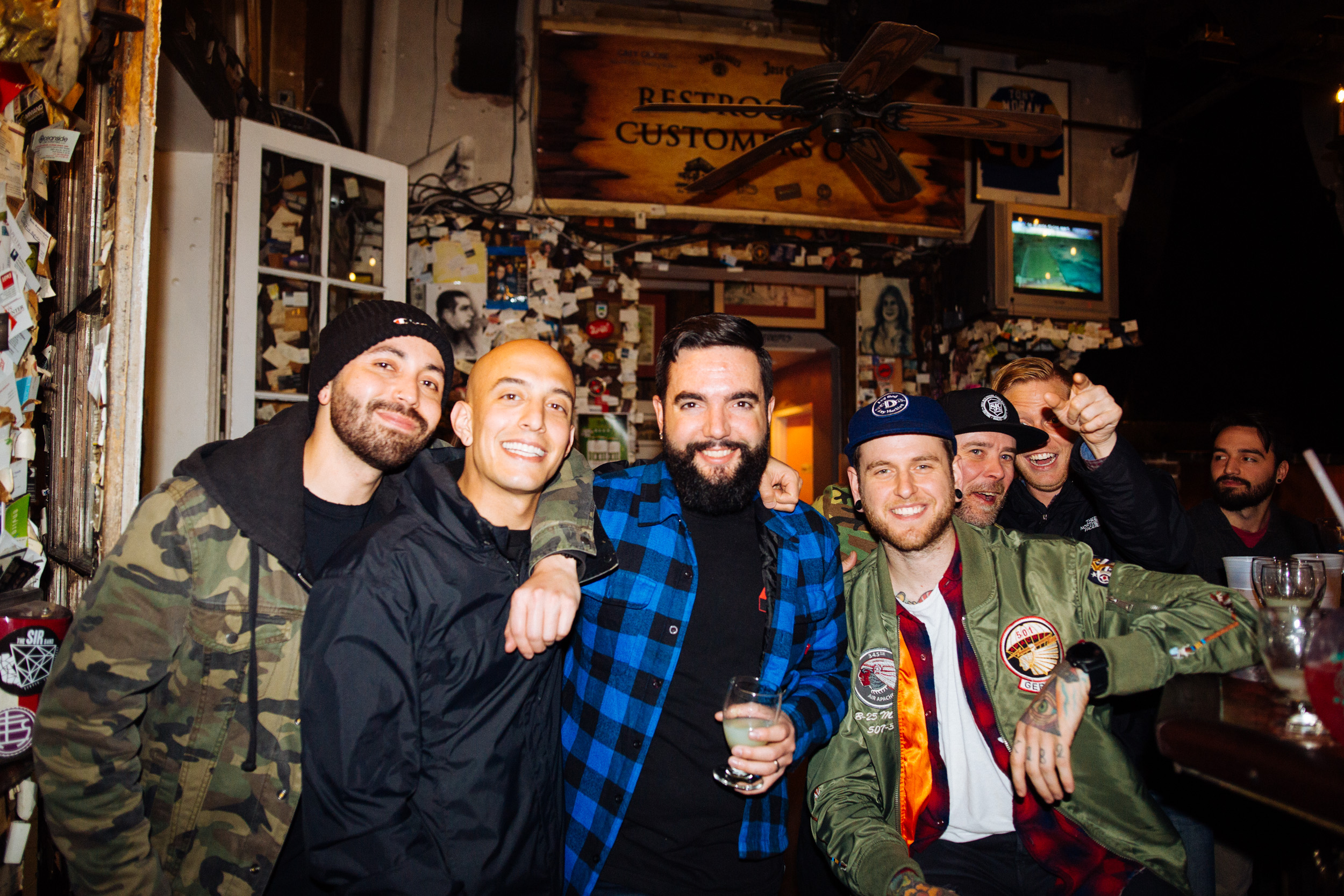 I love these people. I like this photo cause its nice light and its candid and that combo doesn’t always happen.

This is after a festival that the band puts on themselves. So it is a lot of work! Jeremy had just gotten off stage, so to have this much energy left must have meant he was *on one*.

I love how he towers over the stage, and that it says the bands name. Sometimes a tilted horizon feels more straight then one that is not.

I am not sure what he is thinking. I don’t really know this look. But I like how he is framed by his favorite thing to do.

Soundcheck is much more relaxed than the live show. I feel like you can feel how relaxed he is in this.

I have photographed the ending of their from similars spots countless times.

Two lead singers on the last day of a show. It’s special. The yellow light always reminds me of Ryan Russel cause I grew up looking at his photos.

I guess this just helps you, understand Kevin a bit more. He loves his friends, and he loves a good beer. 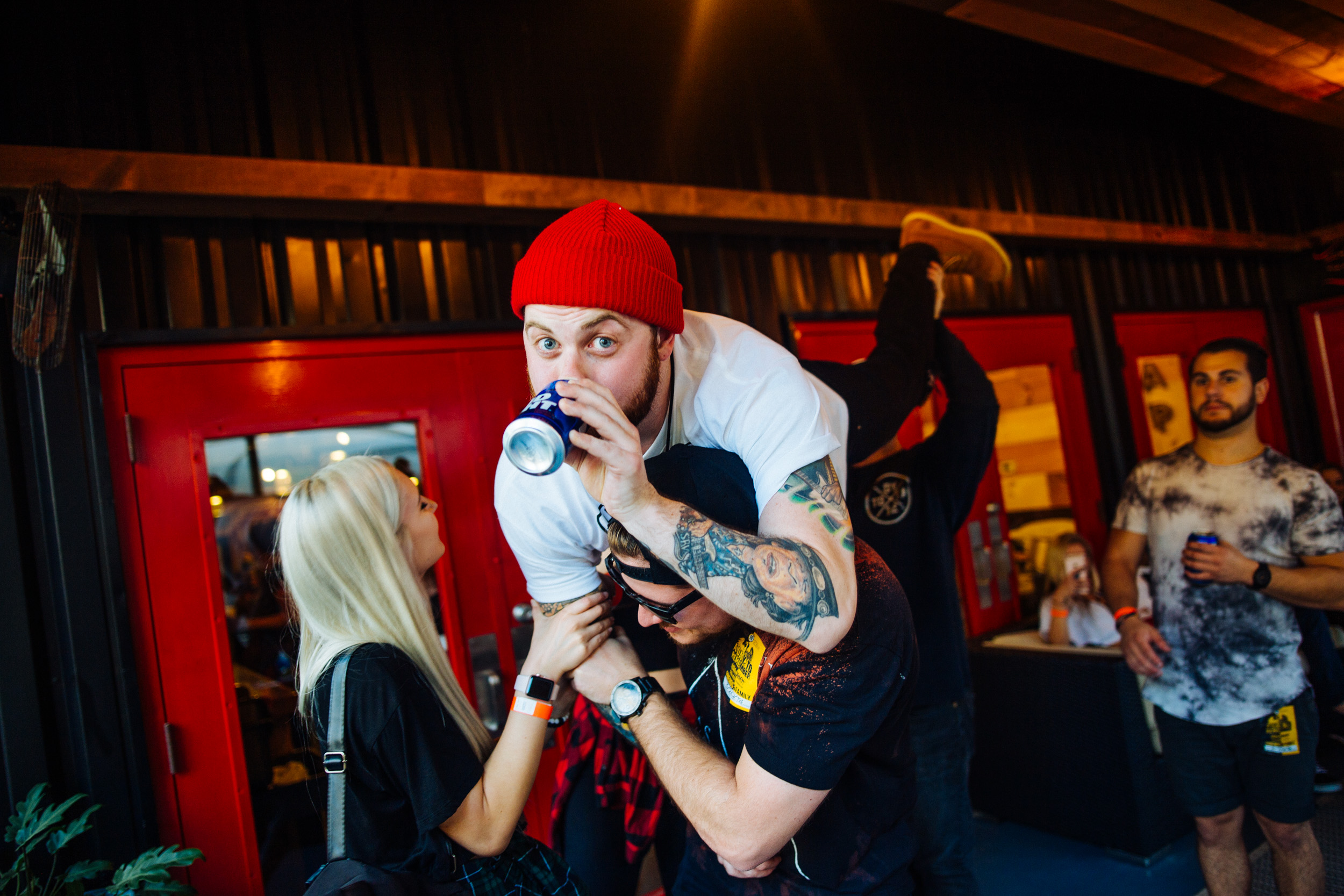 This is just to show you everyone who puts the show together each day 🙂 I am in here also!!

That is all I really got. I hope you like the images.